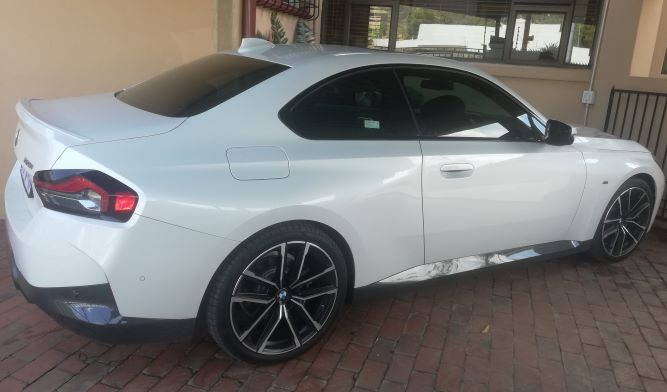 CERTAINTY about the brand BMW is always guaranteed.

Four weeks ago I had a pleasure to play with the all new BMW 220i Coupé.

The irony- no outside Gauteng trips were planned as opposed to the Mini Copper S EV, bloody me…

So, this meant revving from one location to another in this exclusively paired eight-speed Steptronic Sport transmission.

The engine loves to rev leaving behind it a fantastic soundtrack as it moves through the gears picking up speed effortlessly. Dabbing the brakes before entering a corner it quickly slows down before settling in with little or no body roll as you exit with your foot hard on the accelerator.

The grille is fitted with slats that open automatically as and when the engine requires extra cooling and remains closed otherwise to improve the car’s aerodynamics.

The 3D designed rear lights at the outer extremes of the rear, along with the spoiler lip of the boot, certainly give the 2 Series a distinctive flavour while the long bonnet, short overhangs and set back passenger compartment amplify its sporty demeanour.

The interior, as you would expect from BMW, is all quality with leather, soft touch surfaces, faux polished aluminium, low seats that enhance its sporty character and the digital instrument cluster not dissimilar to the 3 and 4-Series.

The infotainment system, once you’ve got used to the BMW operating system, is easy to use with good resolution and is Apple Carplay and Android Auto compatible.

As expected there’s all necessary safety aids and driving assistance, including lane change warning which took me a while to figure out how to disable it as a result of occasionally getting too close to the lines as I took ‘ownership’ on the roads.

A lot unfolded as a result of the 220i Coupé- talk of walkin’ the talk.

Legend has it- what happens in Jozi remains in Jozi…

It comes with a comprehensive warranty and a five-year/100 000km motorplan.

Late gospel star Fraser to be buried in KZN

IQOS launch in SA an alternative for cigarette smokers

Come on board the Oh Ship Captain awaits