Celebrities Exposed, is a show in South Africa that works with private investigators and a camera crew to expose what South African stars are really up to. 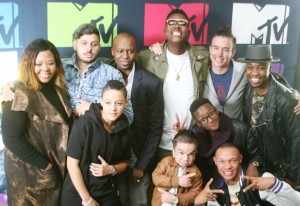 MTV Base VJ winner, Sandile Ntshingila, hosted the event and introduced Viacom’s Monde Twala and 947’s Anele Mdoda, who would be there to discuss the show. Ntshingila described Celebrities Exposed as a show that “digs deep”.

“A show that’s never been done before. It looks at real life situations, and we work closely with investigators to expose the truth. There are a lot of tabloids that look at these things, but there’s nothing on TV,” he added.

Mdoda then introduced herself as the executive producer of the show, comparing it to the Jay Z and Solange Knowles elevator incident, and saying that with the backing of an international channel like MTV, you have the resources to reach where other people cannot reach.

Ntshingila asked which celebs they’d be exposing, but Mdoda wasn’t quick to spill the beans. “I’m not going to name names, because it’s going to give it away but they’d who you’d deem A-listers. And there’s quite a scandalous one, as this a-list couple have just hooked up and there’s something on them in there as well.”

The discussion, however, was interrupted by comedian TollA$$Mo shouting at Ntshingila, Twala and Mdoda, asking how they could have a show that ruins lives. “This is bullsh*t. Anele, you cannot make shows like this. I’ve got a personal and private life. They’ve got a video of me and my side piece. What is my wife going to say?”

Tol A$$ Mo then preceded to shove Ntshingila when he came between him and Mdoda, but luckily before things got too heated, the rest of the cast of #YouGotGot joined in. Ntshingila, Twala and Mdoda were all in on the joke.

“Celebrities Exposed is not a real show, and you all just got got,” said Tol A$$ Mo.

Hosted by Tol A$$ Mo, the show pranks unsuspecting citizens with pranks seen on the internet, as well as pranks submitted by viewers.

Well done to them, as everyone in the crowd was definitely expecting to see some South African celebrity scandal, but ended up being part of a TV show for real.

The crowd was then treated to the season 2 premiere of #YouGotGot, and luckily there was plenty of laughter to sooth the tension from earlier.

In the premiere, you can look forward to seeing a car guard salesman in Vanderbijlpark, a street side stripper, a shirtless street fighter, and “executive producer”, Mdoda getting pranked herself.

She sure got her revenge. And in episode 3, which premieres on Monday, 23 May, on MTV you can see members of the press being pranked.

Follow the conversation and check out some clips of the stunt using the #YouGotGot hashtag on Twitter.

We’re still reeling from it all, but it was an excellently executed prank, and we look forward to what else they have instore for viewers.