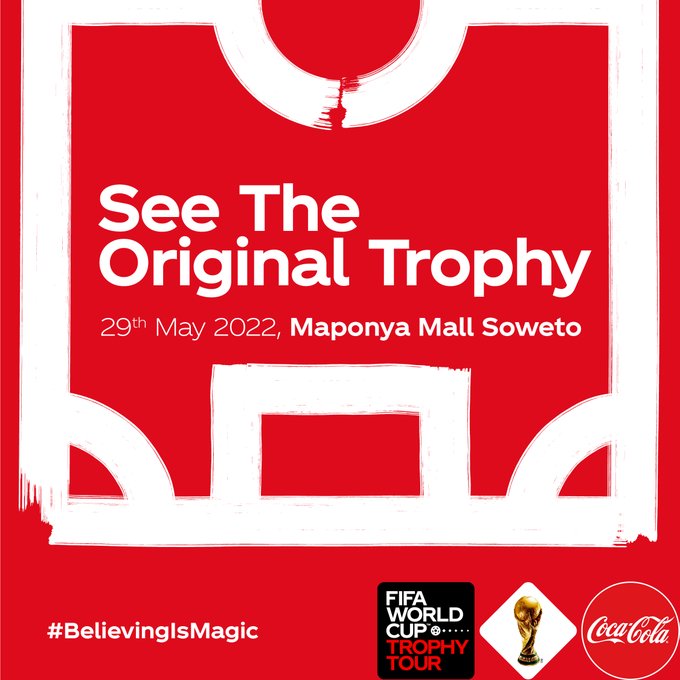 On 28 and 29 May 2022 Maponya Mall will be the hive of activities, as one the most sought after trophies takes a turn in Soweto.

Bafana Bafana legends that shone during the 2010 FIFA World Cup™ are set to join hands with Coca-Cola to re-live some of the magic and bring excitement to the FIFA World Trophy Tour.

South Africa has been confirmed as one of the 51-nations that have the honour of hosting world football’s most prized asset from 28 to 30 May 2022, courtesy of the FIFA World Cup™ Trophy Tour by Coca Cola.

As part of the magical experience, Coca-Cola is excited to be partnering with former heroes of the 2010 Bafana Bafana squad.

This will see fans having an opportunity to enjoy the magical experience of the FIFA World Cup™ Trophy Tour along with the former stars.

Scorer of the first ever goal in a FIFA World Cup™ tournament hosted in Africa, Siphiwe Tshabalala along with Reneilwe Letsholonyane and Teko Modise will form the trio of Mzansi legends to travel with the Official Trophy throughout its tour, while interacting with fans at the various Coca-Cola experiences which include the arrival ceremony on 28 May, as well as the Coca-Cola Fan Experience at Maponya Mall on the following day.

Fans outside of Johannesburg can still be a part of the magical experience, as all three legends will be sharing and engaging in FIFA World Cup™ Trophy Tour conversations across their social platforms throughout the three days.

So far, the bus has visited and spread the magic in Alexandra, Cosmo City, Tembisa, Maponya Mall, South Gate Mall, West Gate Mall, Jabulani Mall and will be heading to more locations this week as part of the tour.

A belissimo is what Alfa Romeo’s Stelvio is all about

“Coffee Bae” opens art studio in his township Sasolburg, all thanks to Gran