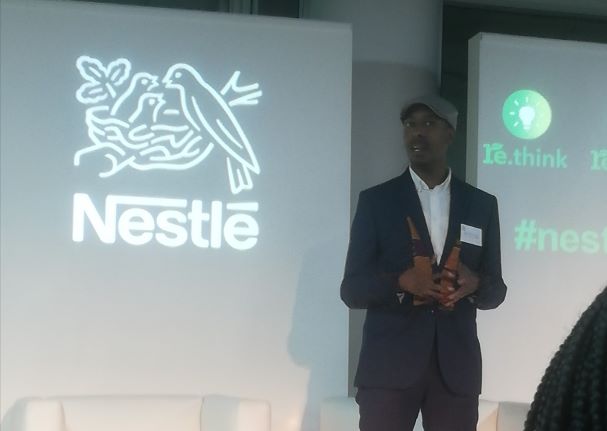 FROM Linear to Circular- for me and my working team, means rethink, reduce and repurpose waste, says Shadrack Mashigo.

Mashigo is part of a co-operative Destination Green that recycles everything from bottles to boxes and metals in Tembisa, Ekurhuleni.

He was part of the Nestlé East and Southern Africa (ESAR) from Linear to Circular, an art exhibition profiling three of its flagship sustainability initiatives that are part of its RE programme.

The initiatives are profiled in a body of work by artist, Dillon Marsh, whose photography explores the relationship between humans and their environment. It runs from June 7 to 30 at the Melrose Gallery, Melrose Arch- Johannesburg.

The hard-talking Mashigo and other waste collectors, joined esteemed panel of experts, academics who tackled issues of waste management, climate change, legislation on waste- particularly plastic, and so on. One panelist even suggested this topic should be added as part of curriculum at schools.

Unfortunately, no representative from the department of environmental was present.

Since its launch in September 2021, the initiative has developed a playbook that has formalised data collection at buy-back centres, while empowering waste reclaimers through training, capacity building and incentives.

To date, working with 150 reclaimers, a total of 188 tonnes of waste has been collected and some of it has been sustainably processed to make dustbins that have been installed in Tembisa.

In George, Skimmelkrans Boerdery is well on its way to being Africa’s first net zero dairy farm. The pilot uses regenerative agriculture practises to trap and reduce emissions, save water, reduce energy, while increasing milk quality and productivity.

Using mixed pastures increased soil carbon at an average of 0.11% in the first year, which relates to 4,723 tonnes CO2 sequestration from the atmosphere on the 600-hectare farm. Manure management through the screw press separator prevents 500 tonnes of carbon from escaping to the atmosphere annually. Active water conservation measures at Skimmelkrans save 292,500 kilolitres a year through irrigation, and 21,900 kilolitres a year through recycling.

Pretoria, in Hammanskraal, at the Babelegi factory, is the industry-first carbon capture technology that draws fumes from manufacturing processes and converts them to bicarbonate of soda and water.

The initiative is in partnership with the Emissions Capture Company and pending its imminent success, will be rolled out to manufacturing facilities across the region. Based on the pilot’s data, rollout of the technology will prevent 5,516 tonnes of carbon dioxide from escaping to the atmosphere, 9,284m3 potable water will be saved annually at a typical factory.

Nestlé East and Southern Africa (ESAR) Corporate Communications and Public Affairs Director, Saint-Francis Tohlang, said, “This exhibition is an exciting venture as it stretches us in the ways we tell meaningful stories about our sustainability commitments in South Africa and the rest of ESAR.

These pilot projects have been online for over a year and this exhibition is one way of keeping track with each initiative’s development. By capturing these initiatives in a moment in time, we hope it will spark robust dialogue on principles of circularity.

Each of the initiatives profiled in the body of work speaks to three principles: rethink, reduce and repurpose, and these are values that our communities in the region espouse. As Nestlé ESAR, we have scaled them for a bigger impact that can make a meaningful difference to our planet,” says Tohlang.

The opening of the exhibition coincided with similar campaigns in other parts of the east and southern Africa region.

In Kenya, a schools clean-up programme aimed at driving stewardship around waste management in schools was launched on the same day. In Mauritius, a beach clean-up is set to be hosted on World Oceans Day, driving a similar message on waste management.

As for Mashigo, he hopes the legislation that threatens to shut scrap-yards will be reconsidered as it will take away a chunk of their job and earnings.

‘Futurism’ is the new Baleno

CoJ budget speaks to its people

Zuma did not protect me -says Hogan