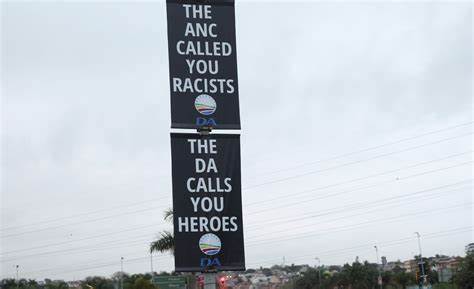 This week, the official opposition put up posters that read: “The ANC calls you racists, the DA calls you heroes.”

According to the opposition party, the posters are to honour those who stood up to protect their property during the July unrest that resulted in 36 people losing their lives in the area.

Speaking in Mabopane, Gauteng, during a street imbizo on Wednesday, Cele slammed Steenhuisen for rubbing salt into an open wound.

“For you to come and put extra salt of racism on this matter. I’ve always had my doubts about John Steenhuisen but I don’t have doubts now. I’m flabbergasted about this,” said Cele.

Cele said Steenhuisen was nothing but a “political criminal that the nation needs to deal with”.

“He has no conscience and no brains whatsoever, for him not to find a problem [with] what happened in Phoenix,” he said.

Amid accusations that the DA was fuelling further racial tension in Phoenix with the posters, Steenhuisen had earlier defended the party’s decision to erect the posters, saying Phoenix residents “deserve” to be called heroes.

Addressing the media, he said Phoenix residents “didn’t retreat in the face of danger or hide away like the SA Police Service and [minister] Bheki Cele’s people”.

Steenhuisen also denied the DA was using those who lost their lives in Phoenix as a political tool.

“The politicking started when Bheki Cele, the ANC [former eThekwini mayor] Zandile Gumede and the EFF went into Phoenix and started painting an entire community with one brush,” said Steenhuisen.

“The only people who were calling other people racists are the ANC and the EFF. We are saying: don’t paint an entire community with the same brush,” he added.

Public urged to get tickets for Miss SA 2017. Who will walk away with R1m?

Win a Scottish Leader bottle in time for Whisky Live