South Africa's tennis quadruple of Tucker Vorster, Ruan Roelofse, Dean O' Brien and debutante, Lloyd Harris accounted for a 5 - 0 whitewash of their Luxembourg opposite number comprising, Mike Scheidweiler, Ugo Nastasi, Alex Knaff and Tom Diedirich in the course of three days of Davis Cup Euro/Africa Zone, 1st round tennis at a sun-kissed Irene Country Club in Tshwane over the weekend. 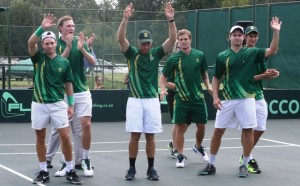 Assembled by new captain and former player, Marcos Ondruska, the youthly South African charges didn’t drop a set in any of their scheduled matches as they dismantled Luxembourg over three days of tennis witnessed by a sizable and appreciative local crowd pending a 116-years old tournament commonly acclaimed as the world cup of tennis contested by 135 countries worldwide.

Teenage debutante, Lloyd Harris continued the spirit of victory in his subsequent match against Ugo Nastasi by triumphing over his European opponent by an identical scoreline of his compatriot’s opening match.

Under a mid 30’s, late summer sun, the local duo of Dean O’Brien and Ruan Roelofse then combined in the doubles tie to account of Mike Scheidweiler and Ugo Nastasi, 6-3, 7-5, 6-2 around lunchtime Saturday.

Missing their 46-ranked top seed, Gilles Muller, Luxembourg’s captain, Johny Goudenbourg then sent on Tom Diederich for the penultimate of the Sunday matches against local, Vorster – with the latter duly making light work of his opponent, 6-3, 6-4.

The hosts rounded off a weekend of delight in the final singles with a battle of teenage debutantes in the form of 19 year old Capetonian, Lloyd Harris against 18 year old, Alex Knaff – with the former overcoming the visitor by a 6-2, 6-1 rout.

Having achieved the weekend feat sans the services of top ranked, Kevin Anderson and doubles grand slammer, Raven Klaasen, the South African team now progresses to a second round tie with yet another European foe in the form of Lithuania who handed the locals a 3 – 2 quarter-final defeat back in 2014.

Tentatively penciled for early July, the away tie will offer the South African tennis squad a chance to avenge their previous loss.