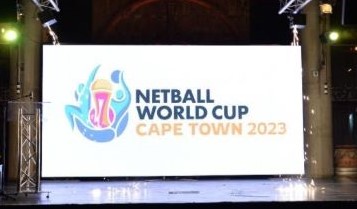 SA will be the host and on Tuesday, revealed the 2023 Netball World Cup logo in Cape Town, the host City.

Excited but very cautious Netball SA president Cecilia Molokwane, says they will do their best to produce the best spectacle and showcase what SA has to offer from sporting to travel perspective.

She also lamented that: “For as long as we continue to treat netball as an amateur sport in SA, we won’t be able to win a medal at the World Cup. We are calling on all spheres of government to grant us our wishes and make the sports professional. The World Cup must leave a legacy and it should start now,” said Molokwane.

Deputy sports minister Nocawe Mafu says this is history in the making.

“It is a proud moment for the country. Two years ago, we were given the right to host the World Cup and it still feels like a dream. But I say that it is time for netball and Africa to shine on the world stage,” she said.

Proteas skipper Bongiwe Msomi said it was an emotional day, as she could not believe SA would one day get the opportunity to host the World Cup. “It feels like a dream and as players we cannot wait to be a part of the World Cup,” said Msomi.

Netball World Cup chair Patience Shikwambana and SASCOC board member, said this World Cup would unlock opportunities for “our girls as they continue to raise the SA flag abroad.”

The tournament augurs well for both economy and sport tourism.

Soweto residents take out their frustrations by heading to Eskom head- office, as they brace chilly weather

2017 Miss SA winner to pocket over R1m in cash and prizes!