An evening with legends of Madiba in Sophiatown! 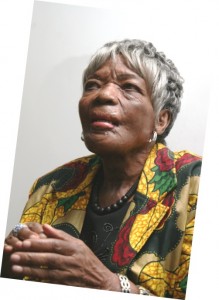 The event, hosted on a balmy, autumnal evening at a location which underwent successive name changes, was in tribute to five jazz divas, namely, Thandie Klaasen, Dolly Rathebe, Sophie Mgcina, Dorothy Masuku and Abigail Kubheka – collectively known as, Legends of Madiba – owing to the late statesman’s penchant for their music and his insistence of having them perform at his public appearances.

At a venue named after a central figure synonymous with the then cosmopolitan make-up of the area in the person of the Anglican cleric, Trevor Huddleston – a sizable horde of old-timers, relatively young sophisticates, foreign visitors, aficionados as well as members of the fourth estate – packed their picnic baskets for an evening entailing the viewing of a video documentary featuring the divas, a poetic tribute to Thandie Klaasen as well as a live musical performance by the veteran songstress’ daughter, Lorraine.

Canada-based Lorraine organized the event, in addition to being at the forefront of the making of the documentary on the divas under the direction of filmmaker, Helen Henshaw.  Lorraine’s mother, Thandie, was the only honoured legends present owing to two others, Dorothy Masuku and Abigail Kubheka were performing at the Cape Town Jazz Festival and since two others who completed the quintet in the persons of Dolly Rathebe and Sophie Mgcina, have passed on.

The guests, who included DA Joburg mayor candidate, Herman Mashaba’s wife, Connie, enthusiastically tucked into their appetizing picnic spreads as they lend their hammer, anvil and stir-up to anecdotes of African women’s defined lives and roles under an Apartheid society, Thandie’s glorious times when she’d open for visiting American luminaries such as Eartha Kitt, Percy Sledge and Brook Benton and how in the video showing, she describes black and white people as being akin to the ‘piano keys’.

Unmistakable aficionados, the attendees washed down the sounds of Lorraine Klaasen with ample bottles of red and white wine which seemed to flow freely around the tables dotting the ambient space adorned with artwork which included a vast black-and-white canvas of then Drum magazine photographer, Jurgen Schadeberg. 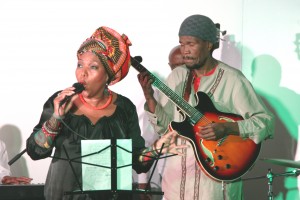 From 1950’s Sophiatown to Apartheid-era Triomf and back to post-1994 Sophiatown– a sense of history pervaded the gathering and the flighted video documentary perhaps served to remind the old-timers and the young alike to renew appreciation for the current democracy South Africans of every hue enjoy!