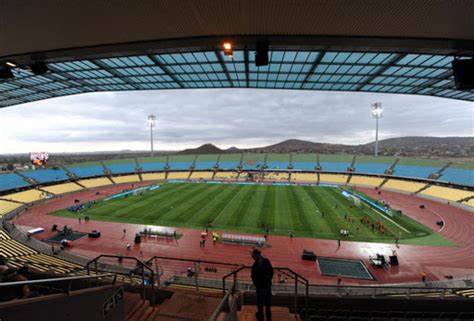 This follows the confirmation by both Premier League and sponsors Nedbank, that the game between Mamelodi Sundowns and Marumo Gallants will be played at the (2010 World Cup stadia) Royal Bafokeng Stadium, in Rustenburg, Bokone Bophirima Province on May 28.

Due to the pandemic and North West no longer having a premier football club after the demise of Royal Bafokeng Football Club, fans were left with no option but to travel to other provinces to quench their thirst.

“Its’ costly and some of us have to use taxis or hire busses to ferry us to the games. It came as a surprise when we heard that PSL and Nedbank have decided to bring the finals to our province. This means a lot to us. Our prayers were answered,” says the delighted Phenyo Morebudi from Ledig, a stone-throw away from Sun City and drive to Royal stadium.

Although the (45) does not support either of the competing clubs; he did highlight he will take his family of six to the game and enjoy the atmosphere after a two-year hiatus of football in Rustenburg.

“There’s nothing much to do here (Rusty) apart from work and going to Sun City. This is a best decision ever by the hierarchy in football,” continued Morebudi, who works at the Royal Bafokeng Platinum mines.

Mpho Nchoe who resides in Phokeng, says she is already ordering enough meat for thousands of fans expected.

The 57 year-old is a hawker and sells everything from pap and meat to fruits and sweets.

“Mine is simple- feed the multitudes of fans expected and all will be perfect,” says the Downs supporter, who also confirmed she travels the length and breadth of the country whenever her teams plays.

We thank the PSL and Nedbank for bringing back football to our region, she exclaimed with joy.

“We cannot wait to welcome fans back to a Nedbank Cup Final and what a venue to do just that,” commented Nedbank Group Executive for Marketing and Corporate Affairs, Khensani Nobanda.

“Over our 15 years of involvement with the tournament we have endeavored to take the final to as many venues as possible to benefit surrounding communities through the match and to allow as many fans as possible to experience the showpiece.  We are thus immensely proud to be taking the Nedbank Cup Final to Royal Bafokeng Stadium for the first time,” she added.

Ahead of the final, Nedbank has also unveiled an initiative for fans designed to inspire and to use South Africa’s passion for football to initiate positive money conversations.  Nedbank Reality Football, a series of tell-all conversations delving into the lives, defining moments and even money choices of some of South Africa’s greatest ever footballers (including Teko Modise, Doctor Khumalo, Siphiwe Tshabalala, Reneilwe Letsholonyane, Mark Williams and Jerry Sikhosana), will be made available to fans on YouTube, www.moneyedge.co.za and Spotify with new episodes uploaded weekly.

“We are representing sport, so should have these kinds of discussions often.  I want to give credit to Nedbank for giving us this opportunity to share our stories.

My hope is that this becomes an ongoing thing, it should be permanent,” commented Simphiwe Tshabalala on his involvement in Nedbank Reality Football.

Tickets availability and prices will be made soon.

Image (The picturesque of the Royal Bafokeng Stadium, Rustenburg).

Biometric data to be linked to your SIM card

Soweto and other areas to receive storm water infrastructure upgrades

Moving along with times, Isuzu SA appoints Pitso as VP

Serero’s inclusion a boost for Bafana!