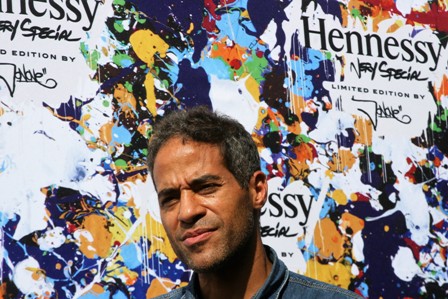 For the media contingent fortunate enough to have cracked the exclusive invites, from the company to the two day shindig – what played out on the course of Thursday and Friday when the mercury of early Spring hit 30 celsius turned out to be the sort of sheer exhilaration as only the 252-years old spirits producer could pull off!

It was the gaiety of the season the French refer to as printemps gushing forth in the sort of sun-kissed and colourful explosion as painted by the visiting abstract artist on the Hennessy Very Special Limited Edition packaging, at the point of rendezvous with the will-to-live determination of Vilakazi Street’s Nobel Laureate Walk business set.

Hosted by Hennessy South Africa’s Michael Ellingworth’s team, Paris-based JonOne- of Dominican Republic extraction- was commissioned for the beverage dispenser’s classic 2017 edition said to represent the Comite de Degustation’sunique expertise where only the most distinctive eaux-de-vie are selected and then carefully matured for several years in oak casks and skillfully blended to reveal their warm, full-bodied flavour containing the lively, fruity character – to be savoured neat on ice or with a mixer!

Inspired by Basquiat early street-based art, Perello started out on his journey tagging pending his youth in New York.

He creates oil on canvas and acrylic paintings which reflect the culture of free style art with the sort of studio ethic that retains a similar uninhibited energy as evident in his graffiti-inspired output boasting boldly coloured, stylized calligraphy arranged in all over compositions which reflect his understanding of both urban walls and canvas spaces.

His energetic techniques use a lot of painting: splashes of drips of colours are part of JonOne’s universe and are exhibited worldwide, notably including at the Bartoux Gallery in New York, Gallery Magada Danysz in Shanghai and Speedstra Gallery in Paris.

At the Funda Centre art workshop on a suitably scorching Thursday, which was day one of what happened to be his first visit to South Africa, the institution’s head of department of fine arts, Charles Nkosi, along with a group of students and Senzo Nhlapo, an alumni – offered a warm welcome to the artist extraordinaire, who had brought along ten canvas pieces of his work, displayed on easels around a display space.

Good-naturedly, one of the displays was a monochromatic portrait of the artist at the age of about 5, whilst another was one titled: 2017 – Hennessy V. S Limited Edition – the basis of the latest art-inspired packaging of the classic Very Special Limited Edition spirit presently consumed around the world.

The session had Perello displaying carefree and inquisitive airs about him as in the informal engagements with the centre’s students, he wanted to hear more of Soweto’s history [other than what he’d learned about from the television and newspapers], as well as the local art scene and the potential of practitioners to make a living from.

“Africa is the future”, he asserted to the workshop attendees, adding that the work they produce henceforth, would potentially convert them into super rich artists in 10 years’ time.

He recounted to them how in his formative years, whilst a part of the subway art period of trains spray-painting [an inner-city culture of the early 80’s when the break-dance craze broke out], he defied his concerned Dominican Republic émigré parents who had urged the importance of an education qualification – that, “he wasn’t going to flip any burgers” for a living.

In spite of resultant arrests from trespassing metro yards and frequent punch-ups – he learned on the streets, and became set on his passion, viz, painting, as a self-defined livelihood.

At the conclusion of the engagement, Nkosi and Nhlapo were presented with two of only ten Hennessy Very Special Limited Edition books containing his work, with JonOne duly obliging his fellow-artists with signatures.

As has become wont of the brand’s will-‘o-the-wisp touch, pretty hostesses clad in business black dresses, worked the display space whilst amiably dispensing soft drinks and water alongside waiters and waitrons from Why Cook’s caterers, whose young owner, Yolanda Nomoyi ensured that participants didn’t leave hungry by serving up canapes, pap-and-wors kebabs, spaghetti-meatball-on-a-stick – as well as watermelon pizza, bristling with colours of kiwifruit, strawberry, pineapple toppings, coincidentally akin at places with those bristling on the 2017 canvas on display!

Friday morning had a sizeable entourage of Ellingworth’s team, media, Lebo’s Soweto Bicycle Tours, Jarat Tours with protocol black V-Class Mercedes shuttle buses and hosting artist Nhlapo, described both enthusiastically and proudly as, ‘the door opener” – assembling at the latter’s outdoor studio along the Nobel Laureate Walk, for a briefing before the commencement of a scheduled adventure cycle tour of four graffiti locations situated further up Vilakazi Street, as well as at Mofolo.

With a first stop at the Box Shop after a rather energy-sapping steep climb in 35 Celsius heat to the top of the tourist populated street, the travelling party called in on Nhlapo’s mentee, Sicelo Kunene’s hip hop-inspired mural partly fencing the complex and had a blast of a time as JonOne and Nhlapo treated fellow cyclists to an impromptu exhibition of break-dancing moves such as wind milling, to the sounds of assigned DJ Deeboi at the decks.

Mentioning being familiar with octogenarian Ndebele artist, Esther Mahlangu’s work and the collaboration that she did with BMW – the middle-aged visiting artist spoke of how he could identify himself in Kunene’s output whilst pointing out to the lonely process of painting which artists have to be subjected to.

It was quiet some sight for neighbourhood onlookers as the cyclists, reminiscent of a Tour de France peloton with support vehicles in tow, winded their way to other stops on the itinerary by travelling invariably via designated bicycle lanes and the left-side of the roads, and with well groomed, black dresses clad hostesses dispatching from the sleek black Mercedes buses with bottles of chilled water for the cyclists to hydrate on at the scheduled locations.

“Guys, keep left, for your safety!” an assistant on the route kept on urging the party, whenever someone veered to the right of lanes laden with unending streams of taxis passing to-and-fro.

With JonOne’s daughter, Taika in the party, Nhlapo demonstrated his knowledge of Soweto’s history by expounding on a bit of background regarding the third location on the tour namely, Eyethu Cinema at Mofolo Village.

With support acts such as an all-male Acapella group and an improvisational trumpeter adding to the flavour of presentations at the stops, Hennessy’s organisational initiative was evidence in motion.

Passing landmarks such as Winnie Madikizela-Mandela’s homestead, the peloton then reached the finish on Vilakazi Street in time for lunch awaiting at Sakhumzi restaurant.

On the eatery’s upper deck a fabulously decked long table decorated with the featured artist’s work, fresh bouquets of flowers and bottles of the Very Special Limited Edition, in addition to a cocktail bar manned by master mixologists and a buffet spread of local fare – greeted the exhausted and panting guests.

Ellingworth [whom Word document this writer uses, suggested his name as Illingworth], a dapper metrosexual of slim cut pants, coiffured hair and a trim stub, presided upon the bespoke occasion by expressing gratitude for all involved partaking in the cycle tour and then introduced the brand’s ambassador who gave a demonstration on the basics of indulging in cognac, as well as teaching how to appreciate the fine things in life!

JonOne was invited to address the gathering about his impressions and reflections and hardly unable to contain himself offered “tonight’s gonna be a special night”, in anticipation to a planned live painting demonstration at Diepkloof’s Zone 6 nightclub, later in the evening.

Shortly thereafter, he was a study of rapt attention as a short documentary film on his collaboration with the brand was beamed onto screens – as the wining and dining commenced in earnest.

The locally-themed fare that Sakhumzi’s head chef Likhona Sithole had prepared included a dish referred to as, uMqa [a pumpkin and braai pap porridge] and with the dessert featuring, once again, watermelon pizza with mint leaves for garnish – which seems to be presently in vogue with caterers.

All this while, yet another set of those easy-on-the-eyes, well-groomed black dresses-clad hostesses, shuttle between the bar and the table carrying trays bearing multi-hued glasses of the beverage of the moment. Whipped in blue, red and yellow, the cocktails contained combination dashes of lemongrass syrup, cinnamon syrup, tonic, ginger beer and non-flavoured colouring.

With the afternoon spring sun embracing the ambience around, banter and laughter, gay abandon abounding – ‘twas joie-de-vivre in printemps [excuse the tinging of this text with Gallic punctuation’s since this was a French product and a Paris-based guest holding fort], gushing forth!

Later, as promised the rhythmic native of upper-Manhattan delivered on his promise of a special night, as he gave hundreds of clubbers at Zone 6, a masterclass in paintbrush stroking by creating a multi-coloured combination of free style artwork on a vertical two-sided glass shield strategically placed on the stage, which he rounded off with a trademark calligraphic daubing of the words: Hennessy – Soweto.

That show, to the accompaniment of sonic havoc on the decks above. Resplendently clad in a music video rapper white tracksuit especially for the performance, the revelers went wild in appreciation of the resultant piece.

Upon concluding his slot, upstairs at the VIP enclosures, with waitresses going around with endless servings of finger snacks, Perello mingled enthusiastically with local artists comparing notes and evidently savouring the moment into the wee hours of Saturday morning!

In his own admission JonOne says being in Soweto reminded him back home Harlem.

“Love the environment, the atmosphere and the ambiance that is similar to where I come from”, he told Sydney Morweng-news editor– on the sidelines.

I’ve always wanted to come to SA after seeing images on television and on newspapers. That alone, inspired to me to identify with this amazing country considering it’s my first and certainly not the last.

“My mission here as you indicated it is, more of an assignment than touring because I’m here to impart knowledge with the likes of Senzo, and encourage others to follow their dreams and be artistic as possible.”

One is also inspired by beautiful women this country is known for, quipped JonOne, as he offered to autograph my special gifted Hennessy Very Special Limited Edition bottle.

“I will be back soon” he promised unwaveringly.