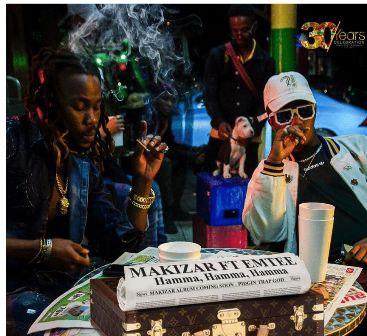 According Makizar born Roland Fatika, the track Hamma, Hamma, Hamma is described as ‘hitting a jackpot’ or having made it despite the challenges one faces from upbringing, he tells SLM during telephonic interview earlier today ahead of the release.

The blissful 29 year old, who has been in mzansi for ages, met Emtee way back as  2008, whilst struggling to make ends- meet and hustling the streets of Hillbrow to make their mark.

Hamma Hamma Hamma could also be coined “Cameroon meets SA” as both artists originate from different worlds but as we all know it- music knows no boundaries.

“I expect my fellow Africans to enjoy the magic created and listen to what Africans can conjure up when Africa calls,” says the poetic Makizor, whose name is drawn from French guerilla freedom fighters.

“Reconnecting with Emtee after years’ of disintegration resulted in coming up with the track and we both enjoyed the uniqueness infused in it,” he says unapologetically.

Way forward, he will be working with another SA star Da Les on his single in September.

Makizar, has smoked peace pipe with Emtee following allegations of not been credited in some songs worked on.

Did the Pres play a part in the deal?