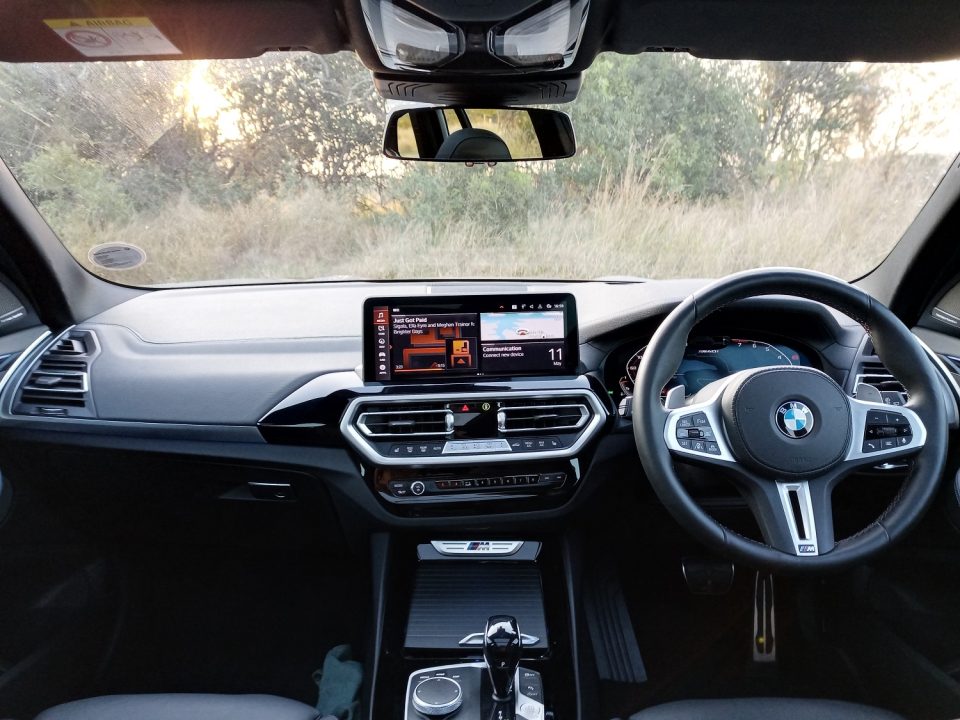 OK, for the uninitiated the X3s are produced and assembled in South Africa.

Aha, now that we know let’s take a look what the new BMW SUV X3 M40i has to offer to Beemer enthusiasts?

We had a privilege to test drive this beau- and yes, a lot happened during and post its collection.

Upon delivery, one could hardly miss that inviting colour known asBrooklyn Grey finish and those Jet Black bi-colour 21-inch alloy wheels. Neighbours helped themselves to selfies during my inspection.

I spent a week with the 3.0-litre inline-6 turbopetrol-engined M40i- and hitting the road N1 to Limpopo for my in-laws burial (rre Mohale may your soul rest eternally in Peace) it was flawless.

It comes in with its subtle M badges on the grille, rear and flanks, and don’t forget those trademark big-bore exhaust ends that gave it a sublime vrrr…

N1 always packed to capacity on Friday’s, for M40i it was propelled by a 382-horsepower turbocharged inline-six that rockets this SUV to 60 mph in 4.1 seconds.

The interior offers a luxury and sportiness synonymous with the BMW brand-thanks to its standard black sport seats, blue contrast-stitching, a black M logo embedded in each of the front headrests, as well as M-branded seat belts.

As we fast approached Polokwane CBD, in the company of my colleague Mdu Mphahlele, one could not help but notice that M40i’s 3.0-litre inline-6 turbopetrol motor is a legendary powerplant, thanks to its 285 kW and 500 Nm torque, claiming an acceleration 0-100 kph in 4.5 sec and eclipse 100 kph in under 5 sec.

As always, I enjoy the iDrive menus for inspection purposes. This helps with choices for driving be it sport; comfort, or standard.

‘This is not a sport car, morena, but a family SUV,’ he remarked with aplomb, upon seeing it parked outside the gate in Botokwa. The dude is fan of Beemers and has a line-up of such.

‘How does it perform on the bends’, he inquired again, “the M40i delivers quite astonishing in-gear acceleration and performs 80-120 kph overtaking manoeuvres with little effort – even in its most relaxed settings”, I responded, much to a smile that could make the late Princess Diana dance.

It features a large 12.3-inch, new touchscreen infotainment system powered by the slick-looking BMW Operating System 7. Its interface has a refreshingly clean and easy-to-use layout, the functionality of which is enhanced by the rather smart voice-control system known as “Hey BMW”.

The wireless Android Auto has debuted in BMW’s executive SUV – it joins Apple CarPlay as a (virtual) must-have feature for the digitally-savvy generation. In the M40i, numerous USB ports are provided, as well as a wireless charging pad (at the front), but note that larger devices won’t necessarily fit in the latter.

As safety is paramount, the M40i comes standard with Driving Assistant Professional, which incorporates, inter alia, active cruise control, lane-keeping assist and steering assist. The lane-keeping assist keeps you on your lane- and one time were trying to allow some donkeys to pass in the village, and trucks and busses making their way to Beit-Bridge, it nudged itself back.

Irritating at times but very important keeping one on your lane, finish & klaar!

We got back from Limpopo without any glitches- suffice to say what happens in Rome remains in China.

Boom- I got a tyre cut towards Main Reef roads as we approached Roodepoort that compelled me to field calls and fortunately some lady at the BMW helpdesk, did explain that, the reason “we” don’t have a spare tyre- its because we use tubeless and blue calipers brakes, that means you can drive for 30km as long as YOU DO NOT exceed 45km/h driving speed.

I did safely -fortunately no hooting from the trucks and other motorists- and the following morning the whole tyre was found and changed by BMW’s fleet team Danie Human.

But make sure to check your fuel tank- it does gallop it!

The M40i comes standard with all BMW warranties.

Images SLM (The interior of M badge produced in SA is no match for others).

Avon representative can now sell from the comfort of her home

Messi takes Gunners to the cleaners as Chiefs stumbles against City!