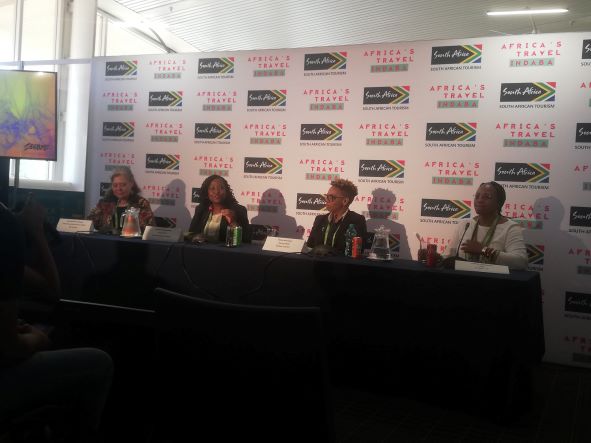 RESILIENCE WAS the buzz word at the recent Africa’s Travel Indaba 2022.

The success of the Indaba saw 55 countries, 19 from the African continent, including South Africa, descending under roof to revive the economy of the country and KwaZulu-Natal over a three-day period. But some continued to extend their stay, especially delegates from other States.

It netted R29 million in direct spending and expects a contribution of R72.5 million to the City’s GDP, although below the 2019 numbers. The exhibition also created 145 direct and indirect job opportunities.

She said the sheer size of Africa’s Travel Indaba, although below the 2019 numbers, “shows the resilience of our sector and our people.”

“Although the numbers were lower than the pre-Covid 19 times, each buyer still had 10 meetings a day on average,” she said.

At the media wrap-up briefing comprising women of ‘steel’ drawn from top organisations, all agreed that despite the setbacks of the pandemic, KZN floods, and looting last year, the country was resilient and open for business.

Deputy Head at Durban Tourism Winile Mntungwa, said the City of Durban experienced hotel occupancy rates of over 85 percent, netted R29 million in direct spending and expects a contribution of R72.5 million to the City’s GDP.

She also confirmed that I45 short term jobs were created during the period.

She said the show instilled confidence in the City of Durban as a great destination and fantastic host.

“Being physically there in a destination gives you a true picture and accurate assessment of the state of readiness to take on tourists again after the triple pandemics – July unrest, Covid-19 and recent floods,” she said.

“All doubts about the city’s preparedness to yet again offer its exciting tourism products have been removed through hosting this travel extravaganza,” she said.

“It was good to host in person again,” says Phindile Makwakwa, the acting CEO of Tourism KwaZulu-Natal.

The 2022 edition of Travel Indaba had an “air of exciting event, real connection, love and passion.”

Makwakwa also decried the impact of Covid-19 on tourism as something that hit hard at the heart of human connection.” she added.

Taking a bow before the panel of women of ‘steel’ the Acting CEO of South African Tourism, Themba Khumalo said: “We are a continent full of people with initiative. We have the energy and passion to revive an entire industry, such as tourism, with our own hands. Our story says to the world that we are ready to welcome them and we are open for business.”

For the first time the Africa’s Travel Indaba Awards were held to honour those tourism businesses and organisations that have advanced tourism during a time of unprecedented technological and industry change and the winners were as follows:

Euphoric Kgomotso Pooe from Sowetoo- described the return of Indaba as a relief too many, having lost business opportunities himself, as a result of the pandemic.

Meanwhile, the success of Indaba has been overshadowed by recent reports of jet fuel shortage in the country.

This was confirmed by Airport Company SA and Airlines Association of Southern Africa on Monday.

Already over R1.5million (it will grow exponentially) has been lost as a result of airline companies cancelling flights to SA.

But both organisations have reassured the country that they have enough capacity and fuel to mitigate this unfortunate scenario that resulted in force majeure.

Soweto and other areas to receive storm water infrastructure upgrades