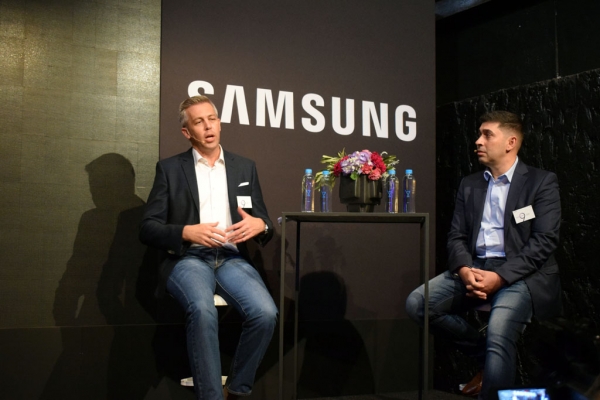 “Re-imagined the smartphone camera unpacked” as the marketing tag suggested was live streamed from Barcelona to South Africa to mark the occasion.

During live stream DJ Koh, Samsung boss, said that the phone had “re-imagined the camera” and that the new features were “designed to help users connect to others and express themselves in a way that’s unique and personal to them”.

Yes, you guessed it right this is in response to the recent Apple’s iPhone.

Analysts believe that Samsung’s new device will be able to breathe new life into the market, following last year’s shenanigans.

The Galaxy S9 comes in two sizes, a regular model with a 5.8-inch screen, and a larger and more expensive S9+ configuration with a 6.3-inch screen. The phone bears a striking similarity to the S8 released a year ago, with the same dimensions and screen sizes.

Host for the evening and comedian (Goliath) says “the smarter the better” as he unpacked and re-imagined the added features in the camera phone.

The device boasts few of the major design changes that featured in its predecessor, last year’s Galaxy S8, or Apple’s new iPhone X, leading to questions over whether it was a worthy-enough upgrade to encourage shoppers to shell out R 15,499 (S9) and R17,999 (S9+) respectively?

Justine Hume, Samsung chief marketing officer: Africa -says the new device augments what Samsung stands for, and it will be available on local content.

The Korean company made huge investment on camera, in particular a dual-aperture feature designed to allows better photos in low light, super Slow-mo video capabilities, the larger S9+ model and features a “dual-lens” configuration on the rear for better zoom capabilities.

The phones can also track facial movements to produce “augmented reality emoji” that mirror the user’s expressions, a feature apparently inspired by the iPhone’s similar “Animoji”.

It is water and dust resistance and fast wireless charging.

The Galaxy S9 and S9+ devices now support expandable memory of up to 400GB and are equipped with the latest premium application processors offering powerful performance and sophisticated image processing.

The devices are protected by Knox 3.1, Samsung’s latest defence-grade security platform. The Galaxy S9 and S9+ support three different biometric authentication options – iris, fingerprint, and facial recognition – so users can choose the best way to protect their device and applications.

Rui Brites, Samsung Head of Product says the translation on devices will be in five different countries, thus making it easier and convenient for users to interact with anyone, anywhere.

The Mozambiquean born who has been in SA since the age of four, says the iconic devices was as a result of customers response on the needs and wants.

“It captures emotions and its innovative -that’s what sells the device,” quipped Brites who is the father of two boy 6 and 10, and also an Orlando Pirates fan.

The smartphones will launch in South Africa on March 9 2018, at select markets and will be offered in Midnight Black, Titanium Grey and a new hue, Lilac Purple.

Yep, the device is mightier than sword!

ASUS wins big at the awards