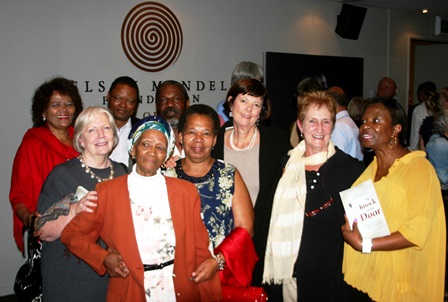 The book accounts the story of the role the Detainees’ Parents Support Committee performed in the anti-Apartheid struggle then.

Co-author of the book, Terry Shakinovsky, a former United Democratic Front activist, constituted a formidable panel which included, amongst others, Mosikare, a then Duduza-based resident who witnessed the brutal death of her brother after he and fellow comrades had been lured under false pretences by notorious askari, Joe Mamasela in the 80’s.

Perlman, a veteran adjudicator at ease in these sort of town hall-esque gatherings, held sway with his knowledge of both the subjects and the subject-matter as the panellists related spell-binding tales to a rapt audience which counted the likes of former first lady, Zanele Mbeki and Max Coleman – a practical figure described as doughty and possessing of a steely and uncompromising attitude toward the police special branch.

Such a stance against the perpetrators of an unjust system was probably becoming for Coleman, since his son, Keith was a detainee and his wife, Audrey’s motherly instinct was tested for weeks on end as most of her life had to be taken up by the familiar sight of brandishing placards protesting against the detention of her son and those of other mothers, such as Margaret Khasu.

Huhudi, Vryburg resident, “Masma” [as she’s affectionately referred to as], Jomo’s mother and now a sprightly octogenarian, was back then the embodiment of an initiative Mashile-Nkosi described as “Noah’s Ark”.

Back in P W Botha’s autocratic state, the matriarch’s abode refuge activists such as Mosioua Lekota, Popo Molefe, Darkie Afrika and many others.

Masma’s involvement was at personal cost too, as she had to lose the presence of two her sons, Khotso and George to exile whilst in their vulnerable youth – that, in addition to Jomo being detained for three years.

Audrey Coleman and Margaret Khasu’s sons predicaments were but a pattern experienced by families such as the Cachalias, whose sons, Azhar and Firoz also suffered victimization at the might of the state; Mashininis [trade unionist, Emma’s husband, Tom]; Prema Naidoo’s and Cedric de Beer’s – to mention but some.

The organisation at the heart of the story, the Detainees’ Parents Support Committee or DPSC, which was inspired by the Argentinian Asociación Madres de Plaza de Mayo – was started in 1981 in Johannesburg by parents, spouses and families of activists who were detained and had no recourse to legal intervention.

Creecy, then an activist in Crown Mines, recalled that when her namesake and future democratic South African government colleague, Barbara Hogan was detained alongside others, it spurred fellow comrades to find a way to support them as “they were all friends who were also supporting one another through the process.”

A student of Webster’s, Hogan’s arrest became a central part of the story of how the DPSC came into being.

Theirs was a non-racial movement which, in the words of Desmond Tutu, shone ‘a light into the darkest places of apartheid’ with ‘steely determination.’

In the tumultuous 80’s where thousands were simply locked up without trial and subjected to physical and psychological torture over prolonged periods, a familiar sight had DPSC members standing on street corners with placards calling for the release of children or other loved ones.

The committee would organise clothing, food parcels and legal representation for detainees across the country.

They marched, petitioned, protested, highlighted the brutal methodologies of the securocrats and generally drew international attention to the atrocities perpetuated against mainly children – some as young as nine.

Audrey and Max’ son, Keith, was held for a period of five months and there is a monochromatic, press image of a younger Audrey surrounded by passers-by whilst holding a placard drawing attention to his plight, on a city sidewalk.  Inside the packed auditorium, Max’ mention and acknowledgement by Perlman, drew thunderous applause from guests!

The modus operandi of security agents back then was par for the course that Audrey claimed to had been reduced to not being surprised by, ‘the knock on the door.’

Some of the DPSC’s work took place at tea parties which authorities found difficult to disrupt. A precursor of the sweeping United Democratic Front which steered the internal initiative towards a democratic order in the face of the continued banning of the ANC and other anti-Apartheid movements, the DPSC withstood the state’s systematic lying and being branded, along with its affiliates, terrorist organisations and had its Khotso House offices bombed by the government dirty tricks machinery.

A comrade whose association and contribution at the organisation induced both fond memories and tears, appears in the form of the first female and black mayor of what is presently known as the City of Johannesburg, the late Sophie Masite.

Masite is described by future successor and former mayor, Amos Masondo as having been one of rare, outstanding activists who was highly disciplined and very committed!

Exhorts Archbishop Emeritus Desmond Tutu regarding the read also co-written by onetime curator for heritage sites, Sharon Cort, “I urge you to read this book and to learn from it. It is a story of the noblest part of ourselves.”

Chiming in with an observation not far disposed from Tutu’s is activist and brother of Ahmed Timol, Mohammad, who offered, “This story must be told so that the ‘born frees’ and future generations appreciate the sacrifices made by so many activists to free this beautiful country and its people from the chains of apartheid.”

Part of the legacy to South Africa’s history that the Detainees’ Parents Support Committee contributed and is worth of a mention, is that, its archive, meticulous collected, eventually provided groundwork for the Truth and Reconciliation Commission of the 1990s.

Eventually after Perlman had wrapped up panel discussion duties, as well as fielding questions and comments from the attentive and enthused gathering, long-lost and last-seen comrades, acquaintances and families from both the Apartheid and democratic eras, rushed to each the others’ sides for photo souvenirs, exchanges of contact details and much catching up – on an occasion incidentally held on the 40th anniversary of ‘the prof’, Robert Mangaliso Sobukwe’s passing.