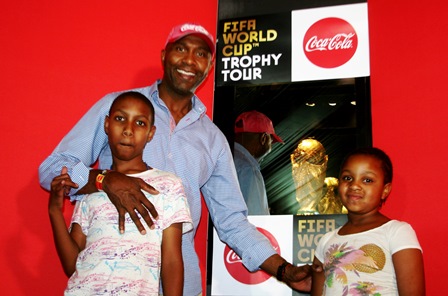 The beverage brand was in town to treat fans and visitors to a one day experience which entailed the viewing of the familiar, golden sculpted masterpiece; contestation in FIFA 18 gaming; personal interaction with former Bafana Bafana skipper, Lucas Radebe and an appearance by local hip-hop’s exponent-of-the-moment, Cassper Nyovest – inter alia!

Nyovest- actual name Refiloe Phoolo and nicknamed, “Mr Fill Up” or “Mufasa” in social circles – has been riding the crest of euphoria associated with the promotional drive of the soccer fest by virtue of having been chosen as a collaborating artist alongside US pop star, Jason Derulo, on the official Coca-Cola FIFA World Cup anthem titled, Colors.

The anthem is due to make its global debut on March 16.

Ever unfairly exposed to international experiences which many parts of the country only learn about from media disseminations, Sowetans’ of all ages responded in large numbers to the tour stop as they flocked under a scorching sun and patiently stood in winding queues leading up to a huge white marquee erected on the mall’s parking lot.

Once inside the marquee, visitors were treated to a brief video beamed on a huge screen; then shepherded onto another section where they could pose next to the physical symbol of soccer’s Holy Grail, for an instant photograph – a souvenir to showoff to those who couldn’t avail themselves for the once-in-every-four-years opportunity!

As was the case almost eight years ago when the self-same trophy was on public view in another part of Soweto on the eve of South Africa’s historic hosting of the global tournament – the organizers weren’t taking any risks with the precious manifestation of craftsmanship as they had it safely encased within some thick-glassed display!  Those lining up to be snapped next to it, didn’t even seem to cast a momentary glance its way, as they appeared to be more concerned with turning to stare at the camera, flash a smile and immediately make way for others en-route to collecting their printed memento.

In the VIP section, erstwhile Bafana Bafana libero, Lucas Radebe, who has been accompanying the trophy on its travels, had his time filled by the constant attention of star struck admirers who tirelessly requested to have photo taken with him.

Some techno savvy other were even inventive.  At an interactive photo-opportunity booth, they optimized the modus operandi of the process by bagging bragging right of having had pictures taken with, not one, but two of their idols.

This is how it transpired: at the said booth, one had an assistant scan a barcode on their wristband and proceeding on to strategically posing in front of a flat screen monitor whilst making eye contact with a camera place immediately above the monitor.  The screen would then show you appearing in a space akin to where television crews usually conduct post-match interviews and suddenly, from your side, would appear one of Ronaldo [the Brazilian one], David Trezeguet, Ruud Gullit, Sergio Ramos or Marcelo taking a position next to you and as though they were actually with you in person.

Therefore, the smart Alek got to ask Radebe to be positioned next to them, saddle a position and wait for the virtual idol to appear, thus making three parties in the frame and, voila!, an outtake posing with two football stars!  You could then log online onto a personal link enabling you to access the recorded images.

With the rather huge mascot, Zabivaka working the crowd and guests invariably lining up in front of fridges stocked up with sample additions of coke groovy cans commemorating the tour or picking finger snacks from waiters with platters roaming around the VIP space, Radebe took a momentary break from media interviews to pose for pictures with his 12 year old nephew, Kgosi and 11 year old fifth grader niece, Lesedi.

But the purposeful sportsman was soon back to give more of his discretion to demanding members of the fourth estate.  Queried regarding how it felt to be an integral part of an event for which a national soccer team he was once a captain of wasn’t going to be a part of in contrast, Radebe was blunt: “We don’t deserve to be there, given the way we’ve been performing.”  Playfully sarcastic, he went out to point out that Soweto was fortunate to “host the World Cup”.

Acknowledging the vibe and atmosphere permeating the Maponya Mall environment, the former Leeds United captain went on to pronounce that South Africa not making it to Russia, offered them the opportunity to re-group and re-plan.

He wistfully added that it was sad not to qualify for the showpiece and then going on to offer the consolatory option of backing African countries such as Senegal and Nigeria, once the tournament commenced in June.

At an event held on Thursday as part of the trophy’s Johannesburg stop straight from Mozambique, newly appointed Sports and Recreation Minister, Thokozile Xasa had made her first public appearance in her new portfolio, where she urged South Africa to support the African countries due to participate at the global showpiece.

At the event, South African Football Association President, Danny Jordaan quipped that he was honoured that Xasa’s first appearance as sports minister was at a football-related event!

Enroute to Cape Town after the estival Soweto jaunt, the coveted trophy has made it onto South African shores every touring year since the official Tour’s inception back in 2006.

According to information gleaned from Wikipedia, the present trophy, called the “FIFA World Cup Trophy”, was introduced in 1974 after Brazil had won the Jules Rimet Cup for the third time at the Mexico World Cup Final of 1970 and FIFA rules had dictated that Brazil would keep it in perpetuity.

FIFA, therefore, needed another trophy and out of 53 designs submitted by artists from all over the world, Italian artist Silvio Gazzaniga’s was the winning design.

It depicts two human figures holding the Earth aloft and represents the joy, exultation and greatness of the athlete at the moment of victory!  Gazzaniga described the trophy thus, “The lines spring out from the base, rising in spirals, stretching out to receive the world.  From the remarkable dynamic tensions of the compact body of the sculpture rise the figures of two athletes at the stirring moment of victory”.

The trophy was made by Stabilimento Artistico Bertoni Company in Italy, and Milano native, Gazzaniga achieved worldwide artistic fame and success with its creation.

Yet, in spite of its magnificent appearance, a voice of objection challenging technical aspects in its detail emerged in the form of a certain Sir Martyn Poliakoff, who asserted that the trophy is hollow and that if, as is claimed, it is solid, the trophy would weigh 70–80 kg and would thus be too heavy to lift.

The trophy has the engraving “FIFA World Cup” on its base. After the 1994 FIFA World Cup a plate was added to the bottom side of the trophy on which the names of winning countries are engraved, names therefore not visible when the trophy is standing upright.

The inscriptions state the year in figures and the name of the winning nation in its national language; for example, “1974 Deutschland” or “1994 Brasil”.

In 2010, however, the name of the winning nation was engraved as “2010 Spain”, in English, not in Spanish.  As of 2014, eleven winners have been engraved on the base. The plate is replaced each World Cup cycle and the names of the trophy winners are rearranged into a spiral to accommodate future winners, with Spain on later occasions written in Spanish (“España”).

FIFA’s regulations now state that the trophy, unlike its predecessor, cannot be won outright: the winners of the tournament receive a bronze replica which is gold-plated rather than solid gold.

Germany was the first nation to win the new trophy for the third time in 2014.

Bestmed continues to give back!

New Speaker Mapisa-Nqakula in for a torrid time