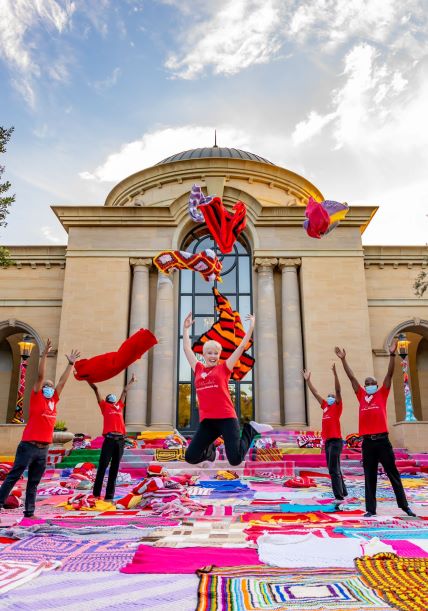 LESS THAN a week before the gigantic Rainbow Nation Blanket of Hope is laid out in Johannesburg as part of the 67 Blankets for Nelson Mandela Day initiative, whose founder, Carolyn Steyn, was recently honoured with the French National Order of Merit.

“KnitWits” around the country have been busy knitting and crocheting up a storm ahead of 11 May 2022, when the massive, colourful “combined” blanket will be laid out at Steyn City School, symbolising the resilience and irrepressible spirit of the South African people during a difficult two years of Covid-19 and lockdowns.

Humanitarian organisation Gift of the Givers will then distribute the individual blankets to people in need ahead of what is expected to be a bitterly cold winter, giving small but meaningful tokens of hope to the rainbow nation.

“This year, we look forward to honouring all our frontline workers, who have worked so tirelessly and selflessly through the pandemic,” says Steyn.

“It’s the ideal opportunity to celebrate all our healthcare workers, teachers, police and emergency services workers, garbage collectors and all those who went out to work on the frontlines, often at great risk to themselves and their families. We hope the symbolic vision the Rainbow Nation Blanket of Hope represents will lift their spirits and remind them of their immense value after a difficult few years.”

Also on board as partners in the Rainbow Nation Blanket of Hope project are Médicins Sans Frontières (Doctors Without Borders), Stuttaford Van Lines (which will be collecting the blankets from around the country and transporting them to Johannesburg for the laying-out event) the Nelson Mandela Foundation and Auto and General.

The 67 Blankets initiative has received a number of accolades over the years, including holding a Guinness World Record.

At the end of March, Steyn, its founder and champion, was awarded the Chevalier de l’Ordre national du Mérite (Knight of the French National Order of Merit) by the French ambassador to South Africa, Aurélien Lechevalier, for her contribution to the deepening of cultural ties between France and South Africa.

Her dedication to improving the lives of others, in the form of her cherished 67 Blankets initiative, was also recognised.

The 11th edition of the SWLF is on!