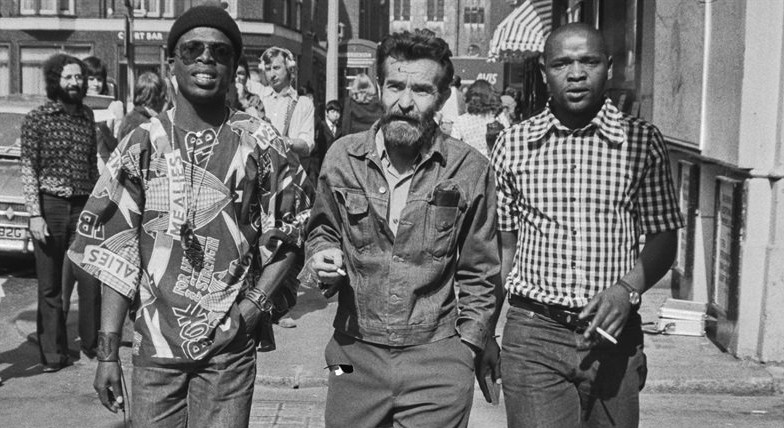 Set in apartheid South Africa, the production provides an angry and poignant indictment of the dehumanising effects of the notorious pass laws which stripped black South Africans of their identity.

The Island is set in Robben Island, South Africa’s notorious prison, where John and Winston are political prisoners and cellmates. After absurdly gruelling days labouring under the sun, they return to their dark cell to rehearse a makeshift performance of Sophocles’ play Antigone.

The young cast consisting of Luntu Masiza, Siya Mayola, and Anele Situlweni have embodied the characters for both plays after meticulously researching the fascinating background and facts to carefully evoke the lives of prisoners during the Apartheid era. Together, they are the most laudable and empathetic portrayers of the outcasts with a direction from the world-renowned actor and director John Kani.

“The role of the arts has always been to educate, inform, and entertain. Going back to these two great classics of the South African theatre, Sizwe Banzi Is Dead and the Island with a young company has given me the opportunity to bridge the generational gap between the youth and elders of our people.

This exercise reminds all of us of the price that was paid by parents for the freedom we are enjoying today. What a joy for me to work with such talented young artists and the Joburg Theatre,” said Dr John Kani.

With the legendary John Kani directing both productions, this year’s school setworks promises to be the most entertaining plays for both young and old.

“Our theatre prides itself in addressing the challenges brought by the COVID-19 restrictions and particularly with schools being restricted on excursions. This program presents a unique opportunity for learners, teachers and literature lovers to experience books on stage and in the comfort of school halls.

I’m also excited that theatre lovers will have an opportunity to see both productions directed by Dr John Kani at the Lesedi theatre for a limited run before it travels to schools,” said chief executive of Joburg City Theatres, Xoliswa Nduneni Ngema.

Both productions will be staged at the theatre from 1 to 16 October 2021 for a limited audience and will travel around the Gauteng Region schools in a suitcase to give learners an opportunity to enjoy the play at the comfort of their school halls, in a safe environment while observing all COVID-19 protocols.

Mlindo collab with Nathi- a partnership worth a while

Maths competition for Primary learners a step in the right direction

Queen Latifah and Common scheduled for AIDS conference in Durban!