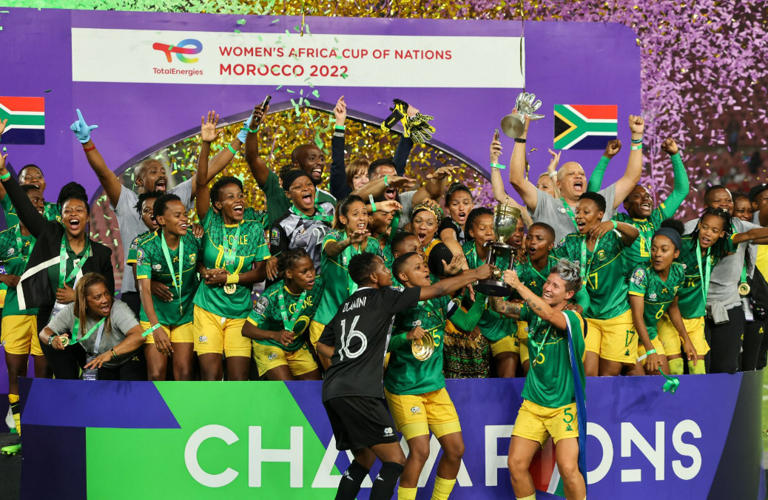 BANYANA- Banyana made (her)story on Saturday evening by lifting the coveted 2022 Women’s Africa Cup of Nations (WAFCON) silverware by outsmarting the stubborn Morroco 2-1, in the finals, in Morroco.

Jermaine Seoposengwe, dependable ‘keeper Dlamini, captain Refiloe Jane and Noko Matlou had to step up as seniors and lead the way.

The girls are now R18million richer and qualifies them a seat to the 2023 Women’s World Cup in Australia. This is Banyana’s very first continental crown, under former Banyana player and now coach Desiree Ellis.

It must be said the team was not given a slight chance, including some of South Africans, in the build up to the tourney, as hopefuls Nigeria were knocked out by the same Banyana Banyana to make it to the finals.

History, will also tell the girls won all of their six games in Morocco.

The South African Football boss Dr Danny Jordaan who was amongst dignitaries attending the finals, stood to his words by confirming they will get their R400 000 each loot.

The Morrocans also displayed quality especially the left footed winger jersey (11) who was a menace for the SA defence side.

With the ‘on-goings of unrest’ in mzansi- we needed this to put a smile on our face, as Seoposengwe alluded during post interview.

Banyana were also confirmed as CAF National team of the Year.

I did report in my previous build-up coverage to the finals that Dr Motsepe will be smiling all the way to Cairo, following this win. Aha!

Messages of congratulations were streaming in from all over the continent.

Yes, hail the Queens of Africa!

Image (SA’s winning team Banyana punching the air with aplomb in Morocco on Saturday evening after winning the WAFCON Cup).

This is the day our world’s greatest leader of all times began his long walk to freedom!