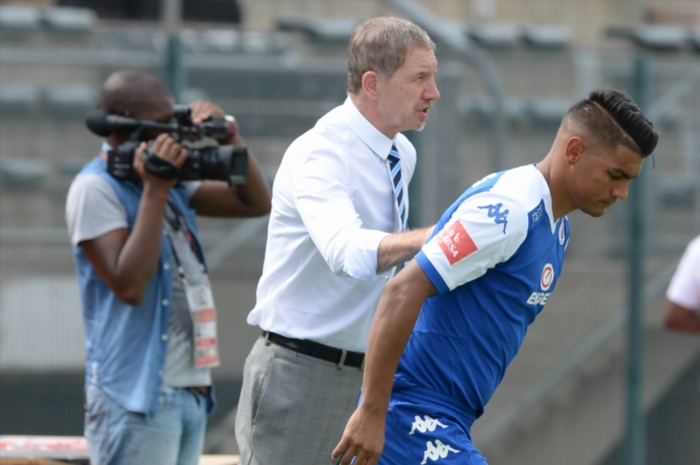 Manyama plied his trade for the Tshwane giants in 2014, and subsequently served a loan spell with Mpumalanga Black Aces, before permanently joining up with the new-look franchise.

City will face SuperSport United in the final of the Telkom Knockout at the Peter Mokaba Stadium in Polokwane at 18h00 on Saturday.

The team secured a dominant 4-1 victory over Free State Stars in the semi-final of the competition last month, and booked a spot in their first cup final ever.

“We were obviously very excited to advance to the final. It is a great achievement for the club. But we soon forgot about it and turned our focus to the important league games,” the 26-year-old told Soccer Laduma.

The player also admitted that coming up against the likes of Reneilwe Letsholonyane in the Matsatsantsa midfield will not be an easy task, but he remains confident.

“We need to be wary of them because they have so many quality players, but we will be ready for the fight come Saturday,” he added.

“They have a very strong midfield and team. SuperSport probably have the most experienced players in the PSL, as their players have been around for a long time and have played in many cup finals, but we are not in the final by mistake.

We have to go there to fight!”

Meanwhile, Stuart Baxter is hoping to complete his collection of South African trophies with SuperSport United this weekend as he goes in search of the Telkom Knockout title.

Having won the Absa Premiership on two occasions with Kaizer Chiefs, as well as two Nedbank Cups and an MTN8 trophy, Baxter only needs the TKO to secure a winners medal for all of Mzansi’s domestic trophies, something that was recently achieved by Pitso Mosimane.

SuperSport take on Cape Town City at Peter Mokaba Stadium this weekend after beating the likes of Mamelodi Sundowns and Orlando Pirates en route to the final – but they face a tough task against the current Absa Premiership leaders.

When asked whether he’s looking to ‘complete the set’ with the TKO on Saturday, Baxter joked, “Do they give sets out for the mantelpiece? Like little miniatures!”

However, he did go on to admit he’s looking to get his hands on another trophy, saying, “It’s definitely something I think about. As a pro you want to win every tournament you enter.

When I was at AIK in Sweden and we entered the Champions League, I had to tell my players that we weren’t there just to make up numbers, even though I knew we were.

“You have to have that ambition as a pro to try and win everything you can and go as far as you can. This is a final, so it’s one game from winning and it would be very, very nice for me.”

Kudos to Cape Town City for clinching the TKO!

Craft Bar at Fairway Hotel, a perfect spot for an afternoon tipple

Africa Month celebrations continue to unfold on the Continent

NAC boss Mangope to report back at work as of today