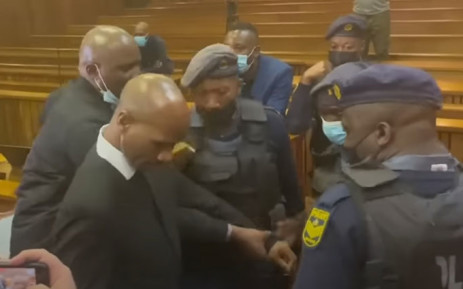 UPDATED– THE MURDER case of Senzo Meyiwa continues to be filled with drama and it seems it will not end any time sooner.

On Thursday, the lawyer representing the four of the five alleged hitment, Advocate Malesela Teffo, was arrested in full-view of cameras inside the Gauteng High Court in Pretoria.

Adv Teffo, it has been learnt, was issued with warrant of arrest by the Hillbrow Magistrate Court as he had missed a court appearance for a separate case in which he is the accused.

Adv Teffo was arrested in July 2020 and charged with trespassing after allegedly trying to enter a police station to represent a client in a labour dispute.

An angry Adv Teffo asked the arresting officer if his attorney had been contacted and questioned why he was being arrested.

He also asked why he was being arrested now, when it appeared the warrant of arrest was authorised for missing a court appearance in January 2022.

“They arrested me because I am in this case,” Teffo told reporters.

He claimed he was being arrested because Police Minister Bheki Cele did not want him defending the accused in the Meyiwa murder trial.

He was taken to Hillbrow Police Station last night and appeared in Court today. His case has been postponed to May 27, 2022 three-days before the murder trial case of Meyiwa on May 30.

But now is has been confirmed the warrant of arrest was fraudulently obtained.

This was confirmed by his lawyer, instructing attorney TT Thobane, who also alleged Teffo had received a number of threatening phone calls.

He reiterated death threats had been received, adding they had also received a tip-off Teffo would be arrested.

“These are intimidation tactics,” Thobane told the court.

It also emerged on Thursday evening minister of Police Bheki Cele had requested a full report from national police commissioner General Fannie Masemola on the arrest and the manner in which it was made.

In a statement, police spokesperson Colonel Athlenda Mathe said Masemola had taken note of the arrest.

“General Masemola has since been made aware that there is a warrant of arrest for advocate Teffo and has henceforth requested the provincial commissioner of Gauteng, Lieutenant General Elias Mawela, to submit a report on the matter,” she added.

Adv Teffo is a former Policeman who resigned to practice law full-time.

He’s known amongst his peers for being brave and a no-nonsense character.

More drama will unfold, keep glued to your seat.

JMPD’s speed cameras and devices not working since last year

Millions of faithfuls will hit the road for holy-days

Wait until Pres Zuma ends his term next year-Maine!