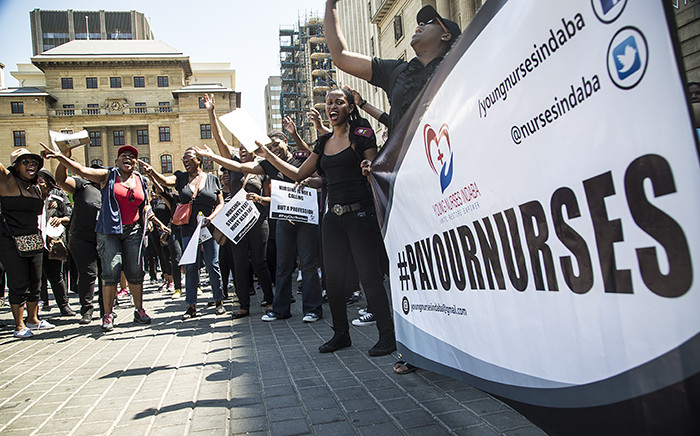 GAUTENG healthcare workers say they are unhappy with the proposed 2% wage increase and that some nurses have been paid up to three months late.

The nurses, who are affiliated to the Democratic Nursing Organisation of SA (Denosa) marched to the offices of the Gauteng premier and the provincial health department.

“Because they did not give us in 2020 our increase, in 2021 they gave us that lousy one. They are still offering a 2% for this year comrades. What a shame. Imagine a 2% when petrol has increased by R10 already. Imagine a 2% when you never received a real increase,” Denosa president Simon Hlungwani said at the march.

The group also complained about nonpayment of salaries and safety in health facilities.

Denosa, Cosatu and Nehawu members marched through the Johannesburg CBD to the Gauteng premier’s office.

Nurses say they are still awaiting their back pay after not being paid for three months.

The Gauteng health department has promised to pay trainee nurses by the end of this week, after the health workers hadn’t been paid their salaries for three months.

The pledge from the health department comes after the Democratic Nursing Organisation of South Africa (Denosa) warned of mass strike action.

Gauteng Health DDG for Corporate Services, Basani Baloyi, said the nurses have not been paid due to a system glitch and budget issues.

“This has not only been the system’s glitch, we also had budget challenges. We looked into these issues and we needed to resolve them, unfortunately we could not deal with the challenges in time because we had the 2021 cohort that concluded their community service by the end of March,” said Baloyi.

She told Newzroom Afrika that the trainee nurses will be paid the full amounts owed to them by the end of this week.

Meanwhile, Congress of the People has called on President Cyril Ramaphosa and the minister of health Dr Joe Phaahla to intervene in the problems that has beset the Free State department of health, reports Sydney MORWENG- News Ed.

Cope says the department is failing in its mandate to execute its managerial functions that boils down to hospitals and clinics in the province.

This follows reports of staff morale being low and some hospital nurses, doctors not getting their monthly salaries.

At the time of publishing it was not clear when would the President respond and Dr Phaahla has been booked out due to Covid 19.

Jessie Duarte- a fierceless fighter will be missed

Its’ the AXE factor for Black Coffee

Bafana will bounce back- "The Dog"