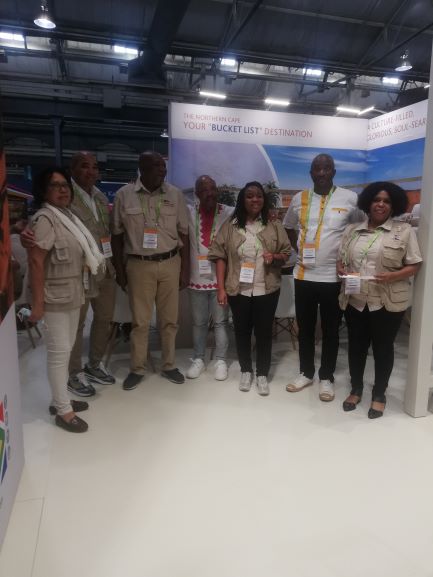 DURBAN- THE NORTHERN Cape Tourism Authority and the Free State Gambling, Liquor and Tourism Authority (FSGLTA) renewed the extension of their Memorandum of Understanding at the Africa Travel Indaba, Durban on Wednesday.

The MOU agreement underpins growth, economic benefits and tourism development in both provinces, that was signed in 2017.

It has been extended for another three-year period.

According to the chief executive at the Free State Gambling, Liquor and Tourism Authority (FSGLTA), Kenny Dichabe, the benefits of this extension will see more growth and developments of key tourism products in both provinces.

“Due to the pandemic we had to put on our re-adjustment caps and be innovative in our approach, on how and when will our small dorpies and SMMEs gain from this partnership, amongst others?”

He acknowledged that since Free State and Northern Cape are both rural regions, this would afford them to tell authentic and genuine SA stories, a theme for this years’ Tourism Indaba, said Dichabe at the signing ceremony attended by local and international traders.

The NC is synonymous as the ‘Diamond Province’ as a result of its world acclaimed ‘Big Hole’ in Kimberley.

And according to Sharron Lewis, the chief executive officer at Northern Cape Tourism Authority, would like to benchmark on that by adding more ‘gems’ as part of product offering.

“The extension of our MOU with the FS province means borders-less free flow of movements and tourists would seamlessly traverse from one region to another,” she said.

More gems would ideally be in the form of supporting our local SMMEs, dorpies, villages and municipalities, and the end results would be both economical and social benefits, highlighted Lewis enthusiastically.

“Telling our proper and no ‘fake’ stories to the outside world and tourists attending the Indaba, comes with its own benefits as we tell what a tourist wants to hear,” she said.

Asked how much rand value has or will the partnership be determined, Lewis did not divulge much suffice to indicate, since tourism is about communities, they stand to gain from the programmes that will roll out in no distant future and because of the pandemic they had to re-visit some of their marketing strategies and re-evaluate others.

The much-loved Macufe festival that is one of key attractions for the FS province makes its return after a two-year hiatus, confirmed Dichabe.