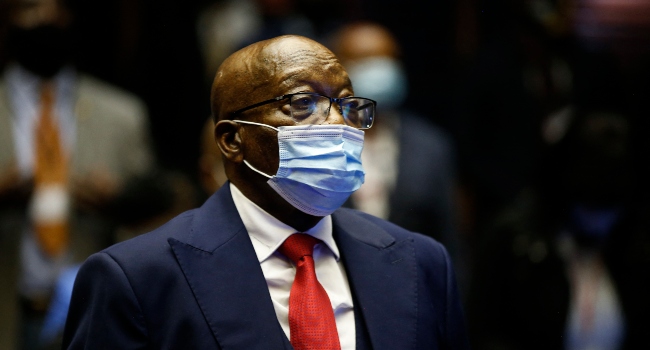 This was the judgment by Judge Piet Koen this morning.

Zuma’s lawyers Dali Mpofu SC and Adv Thabani Masuku argued that the virtual hearing of his case would compromise his right to a fair trial, a move that has been hinted by many as another ‘delaying tactic’.

Zuma was set to make a “special plea” to be acquitted without trial. His lawyers say he wants to testify orally as part of this plea and are against virtual trial.

The National Prosecuting Authority dismissed the assertion, citing this as another delaying tactic by the former president and his lawyers.

In an application to the court, Zuma’s lawyers have cited violent disruptions preventing them from meeting with him as a key reason for asking for the postponement.

Mzwanele Manyi- spokesperson for JG Zuma Foundation says although the former President is “doing-well and looked after by the authority in prison”, one cannot fathom what he’s going through “considering his age and health”.

Outside the High Court in Pietermaritzburg, few Zuma supporters tried to make their way through the barricaded fence towards court but army and police turned them away, swiftly.

Tour has been cancelled. Globetrotters back in SA after decades in honour of Madiba!