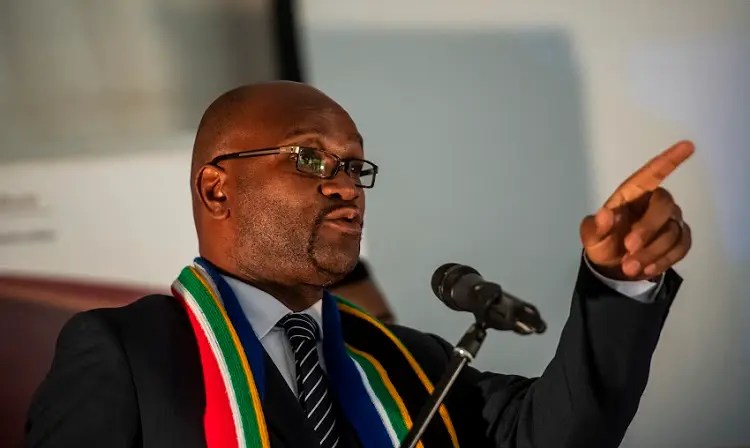 EFF and its leaders had promised to picket outside the offices of the minister on Thursday, on the return of fans to stadia.

But the sport minister is having none of it, having said the planned picket by the EFF on Thursday is ‘ill-advised and populist theatrics’, in his strongly worded media release on Wednesday.

“No amount of irrationality, vulgarity or grandstanding will intimidate the minister, ” said the statement.

“The country’s Covid-19 response strategy is correctly hailed across the world for seeking a balance between saving both lives and livelihoods. The EFF is ill-advised to assume its theatrics will bear any fruit.

“They are advised to show respect to the basic acumen of South Africans and halt their theatrics.

“The choice to picket at the department of sport, arts and culture and direct attention at the minister on a matter based on the Disaster Management Act is quite curious and misguided.”

Mthethwa said he is surprised by the EFF’s stance because they should know the decision to reopen stadiums to crowds does not lie with his department.

“This is particularly so since the EFF is a political party represented in parliament and legislatures and therefore part of lawmaking. An elementary reading of the Disaster Management Act proves that calling on the minister of sport, arts and culture to open up stadiums is foolhardy and bizarre.

“The minister is not empowered to make any such decisions and the EFF should know this. For a party that claims to be made up of academically acclaimed characters, it boggles the mind what deduction could have brought the EFF to conclude the department of sport, arts and culture is the go-to spot.

“Assuming basic facts about the Disaster Management Act are known to EFF, it begs the question: what truthfully motivates their irrational nitpicking of minister Nathi Mthethwa?”

“Fundamental to this strategy is a phased-in approach that remains relevant and is guiding the approach to open up venues. This strategy is currently under consideration through cabinet-related processes responsible for SA’s response to Covid-19.

“In other words, the decision on opening up of venues does not lie with the minister of sport, arts and culture nor his department. A fact that either skipped the EFF’s logic or affirms the belief they are up to something more perverse and are using this matter as a launch pad towards such end.

“The Safe Return of Spectators strategy proposes opening to 2,000 spectators as the first phase, which was accomplished in October 2021. It is intended to scale up to phase 2, 3 and the last phase at 50%, 75% and 100%, respectively.

“The initial target was to be at 75% by now.  Unfortunately the emergence of the Omicron Covid-19 variant made this target unachievable in the initial timeframe.

“The department of sport, arts and culture is committed to pursue cabinet on this phased approach to opening up.”

An organisation that claims to support sport fans also came on board to support the picketing.

PSL is yet to make a determination on returning fans to stadiums as it claims the 2000 limit does not make economic sense.

Rugby had a fraction of fans at some of the games but that was it.

Proteas that are hosting the India Tour have not opened gates as yet.

Image (Not budging. EFF, you listen, as Minister of sport Nathi Mthethwa takes the red beret head-on. They should know better as one of law makers in the country).

Mabopane rail opens to the public, thanks to Prasa

Was freedom only attained by the ruling party, asks our columnist?

Petco recycling awards seek to honour those that strive to keep our environment clean!

The Gospel in Me Concert will be the last for female vocalist!